Now the good stuff! In yesterday’s post I shared about our hike along the Little Gunpowder Falls, from Jerusalem Mill to the old iron bridge at Franklinville. On the way we stopped and explored an abandoned mill race and structure that appeared to be for valving or damming up the water flow. Back at my office on Monday I found a report from 1933 concerning the mill and property.

Here is a photograph of the mill that use to be there:

The 1933 report gives this description of the mill – Wm. Barton Mill in Franklinville, Little Gunpowder Falls. Several mill buildings used for the manufacturing of cotton duck. Mill race and dam have been broken thru since about 1926. Mill was built in 1883. All manufacturing equipment has been removed except for turbine. Barton purchased property from Mt. Vernon-Woodberry Mills on August 5, 1930. Information is sketchy on ownership. 1899 sold to Mt. Vernon-Woodberry Mills, yet they sold it twice. Once to Oak Tire and Rubber in 1925 and to Barton, but notes ownership to Marvin Merryman in 1929. No info on size of mill pond since dam was broken through. Supplementary water reservoir of 20,000 gallons in center of square in tenement section to furnish water for automatic sprinkler system in mills. Dam, made of timber, was about 800’ from mill. There was a water wheel at one time, with 140hp capacity.
Buildings at mill included: the main mill, waste house, store house, boiler house, and wheel house. There were also 3, two family two story houses on property. And more, according to tax records at Baltimore county. Records mention a mill adjacent to this one, to the north, known as Jericho mill. no traces of mill could be found.
Along with the report is this plat which shows the layout of the buildings: 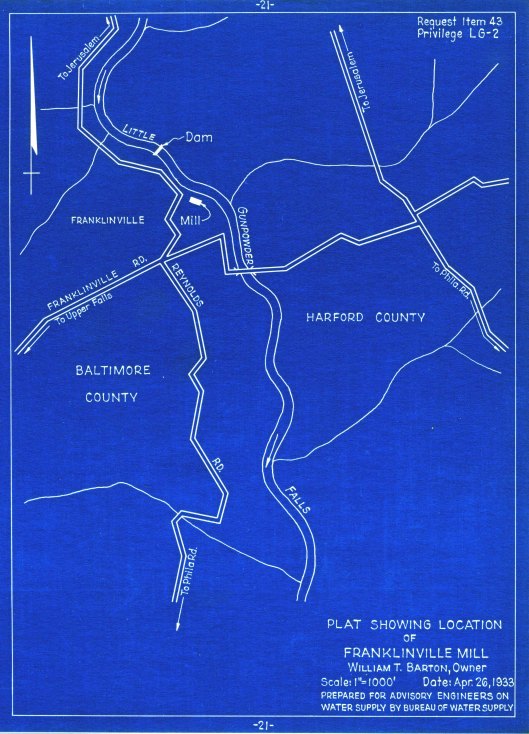 As stated before, we climbed down into the mill race where we saw holes in the structure. I told Kathy I believed them to be supports to hold valves or gates. 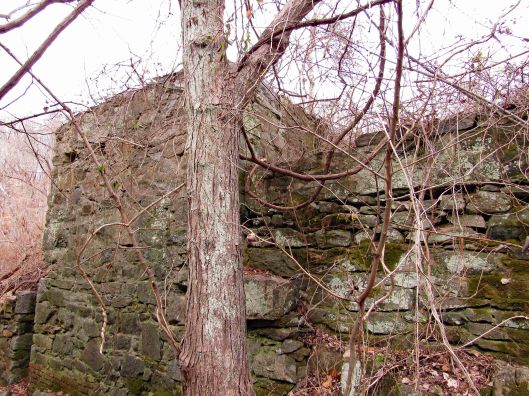 In the report was this photo. The center part of this structure on the left is missing, along with the dam itself on the right.

Below is a photograph of the area today, where the mill use to be. A sign on the fence says it is managed by Carnegie Express Construction Managers, Builders and Developers: 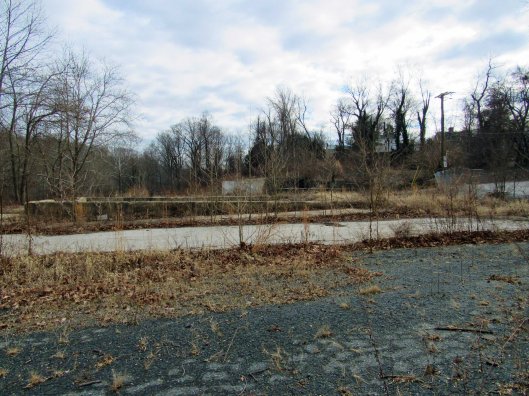 What does this have to do with Baltimore’s Water Supply History?

Typhoid cases, which had decreased by the mid-1920s, would re-emerge by the early 1930s along with a long period of drought. In 1932, the City Government hires consultants to review the status of its water supply. These consultants would form a board of engineers known as The Advisory Engineers on Water Supply. The engineers were Messrs. John H. Gregory, Gustav J. Requardt and Abel Wolman9. On December 19, 1934, the Advisory Engineers released their report:
1) Immediate construction of a new Gunpowder Falls Montebello Tunnel.
2) Immediately following the completion of the new Gunpowder Falls – Montebello Tunnel, the existing Loch Raven – Montebello Tunnel should be strengthened.
3) Conduct surveys, land purchases, sub-surface explorations and preparation of plans and specifications for the development of an additional water supply should be undertaken at once. (Areas of development looked at by the Board were the Patapsco River; the Little Gunpowder Falls, Winters Run and Deer Creek, and the Susquehanna River).

They were going to dam up the Little Gunpowder Falls and all the mills and property along the Falls would need to be bought (or taken). It was decided to go with Item #1 above.