I was recently called over to the contractor’s worksite because they hit another pipe underground. Another one not on their drawings but included in other drawings (Why the engineers don’t look at other record drawings is beyond me). This is a special pipe that I was looking forward to them hitting. I knew it was just a matter of time. 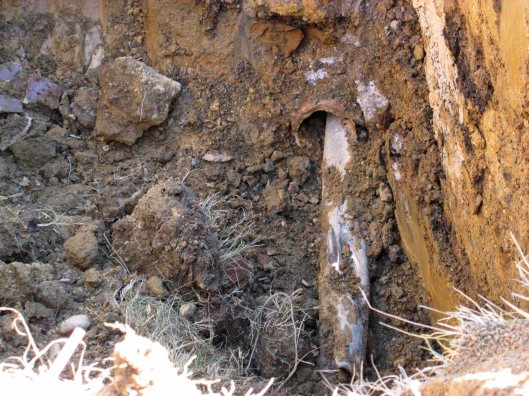 Here it is – a 4″ lead pipe inside an 8″ Terra Cotta pipe. Why is it special? Because I always wanted to see how the alum, manufactured at Plant II was piped across the street to Plant I.

When I first started working at Montebello, these bins were just hanging from the ceiling.

When I asked about them, I was told that alum use to be made here.  When you go upstairs, this is what it looks like.

And years ago, this was the alum plant.

The water engineers boiled up their own alum in lead lined vats and it was then pumped across the street through the lead pipes. Below is one of the vats right after the lead was replaced. Over the years there were many contracts to recoat the insides of the vats. When the vats were no longer used, city workers climbed down into them to remove the lead sheeting.

Below is a photograph from an old water works magazine showing lead and terra cotta pipe.

Lead pipes have been in use since the early Roman days. It was also used as a seal on pipes as shown below. In 1974 a lot of the old gate valves were replaced with butterfly valves. They did not replace the pipe. You can see where brackets hold the pipe together where lead is in the joints. These joints being made 1912-1915.

Another photo of a lead jointed pipe. I believe this is the water main under Curtis Creek. Looking close you can see the workmen pouring the lead into the joint.

The City being the City and always trying to save money started using a lead substitute called Leadite. They also used a sealant over the lead called Hyrolene-B as seen in this 1907 photo.

You have to feel kind of sorry for the contractors (and the city) for all the antiquated piping underground. Here is a site on Montebello property showing the obstacles of past contractors. Unfortunately, these abandoned lines were and are never removed. This photo shows a 5” conduit, 8” raw water, 10” water supply, 4” alum, 4” lead alum and 6” sanitary all in one pit. Under the very top conduit is the 13,000 volt, cement encased, electrical duct bank. 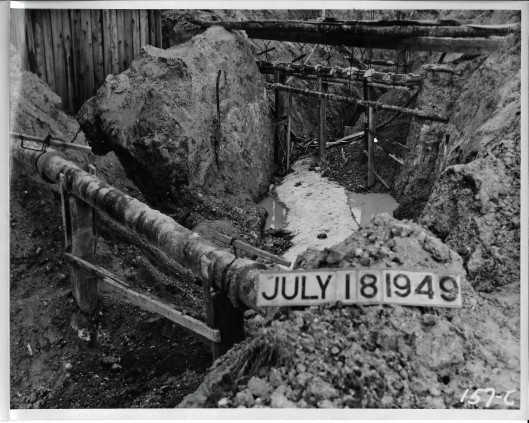 For your further historical pleasures – here is a history of lead in Baltimore:

1923 – Leadite Use: Bureau adopts leadite as a jointing compound and as a substitute for lead on water main installations. Leadite eliminates the use of caulking and can withstand the enormous pressure that the water mains are subjected.
Contract No. 84: Lead Lining Tanks: The Specification was dated July 21, 1926. Contract was awarded to the Joseph G. Graydon & Sons of Baltimore on July 21, 1926.
1930 – The Hampden Reservoir was drained. The outlet gates were closed permanently where possible by welding and then sealed with lead.
1931 – The liquid alum being made at Montebello is more acidic and corrosive than the lump alum. The cast iron pipes and valves can not stand up to this type of corrosion. They were replaced by pure chemical lead for the pipes and hard lead for the valves. Maintenance also had problems with the lead lining in the alum boiling tanks cracking.
A 1934 article appeared in several technical journals, which had given a general survey of the mineral contents, as determined by means of a spectrograph of the water used by 50 cities throughout the country. Baltimore was 1 of the 50 cities used in the survey, and the article indicated that the drinking water as delivered to its citizens contained lead as high as 0.3 parts per million, which was an amount generally accepted as detrimental to the health of people continuously drinking such water. The Water Department being stunned by this article, since this value was higher than any that had ever been noted, decided to ascertain the exact truth of the matter. The Montebello laboratory carried on a series of careful determinations extending through the year 1935. The City Health Department laboratory, not knowing the tests being conducted by the Montebello laboratory, conducted their own investigation for the lead count in the water. The City Health Department tests confirmed the test values conducted at Montebello. The results indicated that the lead content in the raw water never exceeded 0.2 parts per million and after treatment and filtration at Montebello, the content of lead did not exceed 0.02 parts per million. The normal lead count of the water was 0.01 parts per million. The tests proved conclusively that there was no danger whatsoever from lead poisoning due to the drinking of filtered Gunpowder River water.
1936 –  December 7, 1936 letter from Engineer Small to the Chief of Police concerning the theft of pig lead.
1939 – Minute cracks started to appear in the lead lining of the tanks used in the manufacturing of alum. Tanks lasted ten years and produced 20,000 tons of alum.
1941 – The alum steel tanks were relined with lead. Tank #9 was relined with 20# tellurium lead and placed back into service on June 16. Tanks #5 and #7 are planned to be relined using St. Joe lead. Tank #7 is expected to be placed back into service by January 30, 1942; and Tank #5 is expected in service by March 15, 1942.
1942 – Because of the decision by the War Production Board regarding critical materials, the use of copper tubing for new installations was prohibited starting in August. Copper tubing installation was replaced by Type K lead alloy tubing. The replacement of the lead lining of the alum steel tanks was completed on February 7, 1942.
1949 – Pig lead test (checking for radioactivity). Leadite joints on water pipes are failing due to a high content of Sulphur and carbon in the surrounding soil.
1951 – A contract was awarded on December 26 to lead line the three steel alum storage tanks at Montebello Plant No. 2.
1952 – The lead pipe alum line between Montebello Plant No. 1 and Plant No. 2 had several leaks and was replaced.
1953 – Replaced Sulphuric acid pumps for Alum manufacturing. Also renewed was the lead line transporting the acid from the basement storage tanks to the manufacturing room.
1957 – 4 page Sunday Sun article on Weights and Measures. George Leithauser. Mentions chicken sellers using lead weights in birds.

In the late 1920’s a plasticized sulfur cement compound was developed as an alternate to lead for sealing the pipe joints in the field. This compound is referred to as “leadite”. Leadite was commercially produced up until the early 1970’s, and was used extensively from 1941 to 1945 when lead was scarce as a result of raw material needs associated with World War II. Ultimately, leadite was found to be an inferior product to lead for two reasons. First, leadite has a different coefficient of thermal expansion than cast iron and results in additional internal stresses that can ultimately lead to longitudinal splits in the pipe bell. Secondly, the sulfur in the leadite can facilitate pitting corrosion resulting in circumferential breaks on the spigot end of the pipe near the leadite joint. The failure rate in the industry for leadite joint pipe is significantly higher than for lead joint pipe even though the pipe may not be as old.

3 thoughts on “Let’s Get The Lead Out”