Finishing up documenting a Water Board Minutes of Meetings Journal, I came across a couple of interesting tidbits concerning the connection between Baltimore and San Francisco. In 2015 we both celebrated a 100 year anniversary. Them celebrating the 1915 World’s Fair and us the building and opening of the Montebello Filtration Plant. The connection being this – February 11, 1915 It was resolved by the Water Board to send the Filtration and Dam models to the Panama-Pacific Exposition. According to the model itself, it was completed in December, 1914.

Here is a lantern slide copy of the model. If you visited Montebello during our 100th anniversary and took a tour, you would have saw the actual model. 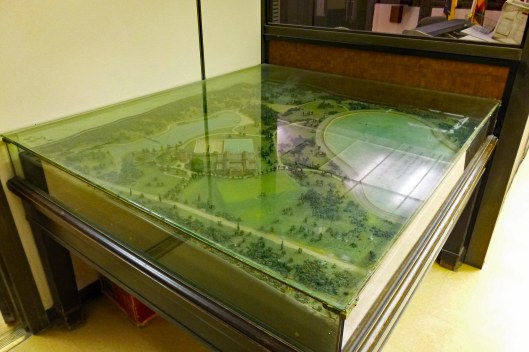 The lighting in the hallway is terrible with all the reflections. It was too dark with the lights out and too reflective with a flash.

Here is the nameplate data on the model.

Along with this one. I did a search for information on this company but could not find much. And something else I could not find is – where is the model of Loch Raven?

Howell’s did a pretty good job replicating the filtration plant.

I don’t know about anybody else, but I’d like to put little people in here…and maybe Godzilla!! 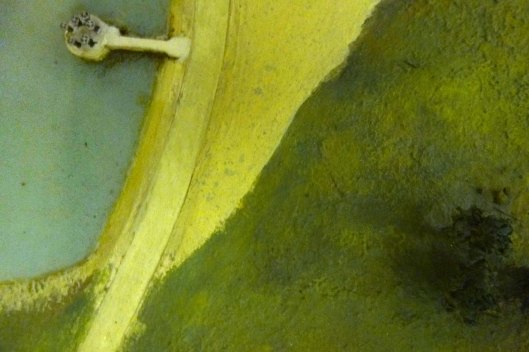 And the detail of the outfall structure. 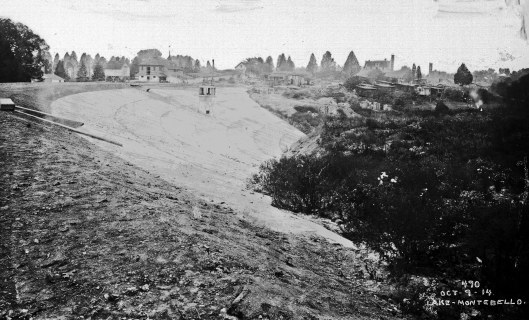 The waste lake dam and outfall structure being built. Notice the date – October 1914. This means that the model was built conceptually, like an artist’s rendition of something before it is there.

Of course, one research item always leads to more.

In 1884 models of the substructures were built and placed in each gatehouse, Loch Raven and Lake Montebello, to give visitors a better understanding as to how each works. (What happened to them?)
February 6, 1893 the Water Board resolved to send a display to the Columbian Exposition. This was 21 years before the Howell Microcosms were built. so what did they send?
November 18, 1935 letter from M.P. McNulty, he has just completed creating a model of the Loch Raven dams and inquires as to the dates the real dams were built. Small replies that the lower dam was built between 1875 and 1881 by Fenton and Jones, Contractor. The upper dam was constructed by King-Ganey starting in 1912 and finished in 1914 and then raised between 1920 to 1922 by Whiting-Turner. Attached to the letter was a newspaper clipping which shows a picture of the model. (This clipping is at the City Archives)
December 31, 1952 letter from William Eichbaum Scale Models informing Hopkins that they will build a new, Montebello Plant model in the existing case for $1,000.00. This was not done.
And for what appears to be a wonderful book – San Francisco’s Jewel City: The Panama-Pacific International Exposition of 1915 by Laura Ackley

2 thoughts on “Montebello and the Panama-Pacific Exposition 1915”