In considering Baltimore’s drainage system, for both sewerage and storm-water, recommendations were made to have them as separate. One reason being:

“A considerable portion of the dirt which finds its way into the sewers goes in through the un-trapped inlets, and it is a matter of common knowledge that the street cleaners, in order to lighten somewhat their labors, are accustomed to pushing the street sweepings into the inlets, thus allowing large quantities of dirt to be washed into the sewers. It must be borne in mind, however, that it is much more expensive to remove deposits of dirt from the sewers by hand than it is to remove them from the surfaces of the streets by carts. If this system of drains had been maintained in a perfectly clean condition at all times, it is undoubtedly true that the capacity of the drains during “maximum” storms, when flooding has occurred in this territory, would have been greatly increased and much less damage would have resulted.” 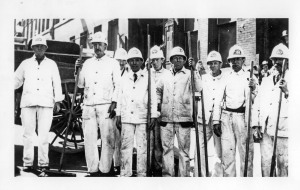