1906 – Before building a complete, City-wide sewerage system, a Testing Station was built to figure out the best means of treatment.

At Hampden and Walbrook, surveys were made and every house located, and in each place a plan for a comprehensive sewerage system was made. As a result of these studies Walbrook was selected as offering the most advantages.

1907 – “Sir: In obedience to the requirements of Section I, Chapter 349, of the Acts of the General Assembly of Maryland for 1904, this Commission has the honor to make a report of its official transactions for the year 1907.” The first sanitary sewers to be constructed were those in Walbrook for the drainage of houses embraced within a prescribed area, and which were constructed as auxiliary to the experimental testing station, as part of the permanent system. Work on outfall sewer and interceptors was begun. There was criticism as to the size chosen for the sewers, but the Commission stuck to the plans of the advisory engineers: Rudolph Hering, Samuel Gray and Frederick Stearns.

These photos show constructing the Testing Station and Lab. Also the sprinkling filters. 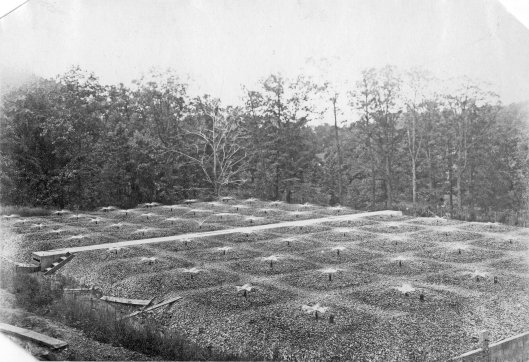 Here is the only reference I could find concerning the exact location of the Testing Plant.It comes from the Johns Hopkins Sheridan Library. I cut it down in size for viewing here. The location is never mentioned in any of the Annual Reports other than “Walbrook”. The testing plant is represented by the two circles at the bottom of the dark lines, just above Patterson Ave.

From Sewage Commissioner’s Report: The sewage testing part of the laboratory has been closed for a number of months, but the testing of all materials for construction work is being carried on, which has proved of great value in getting desired results. The plant is continuing to receive and purify the sewage carried to it from the system of sewers throughout Walbrook. On account of the disposal plant being operated by gravity, the cost of maintenance is reduced to a minimum.