Another “Breaking Ground” ceremony took place in 1908, with Mayor Mahool. It was for the start of construction, for the Eastern Avenue Pumping Station. The plans for this were started in 1906 and the first contract was let in 1907 for the purchase from Bethlehem Steel, three pumps. Later the contract was let for the building itself. Not only did they break ground, they also broke the pile driver used to set the foundation. Because the building was to be so close to the harbor, they had to go deep to hit solid rock. The 3 pumps were going to be heavy.

I hope to be able to find the original photographs in the archives, so I can stop using the pictures from the reports. The first shows the Mayor breaking ground. The second is a panoramic view of the construction site. The third is the broken pile driver. 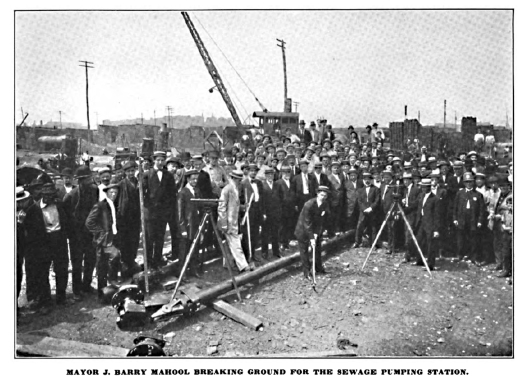