Baltimore, situated as she is, with one main water course through her center (Jones Falls), she had plenty of water for the people. Pure, clean drinking water….until people started dumping their sewage into it. Many Health Commissioner’s Reports talk about what to do with the sewage of Baltimore. Contractors were hired to haul it away. Here are a couple HCRs on what happened over a few short years in Baltimore, until a proper system of sewage could be built.

1865 – The withdrawal of a large share of the water flowing in this stream (Jones Falls), by the completion of the lake and storage reservoirs (Lake Roland, originally called Swann Lake), with the extension of the water works in the city, has left too small a portion of water to keep the original course clean if nothing was thrown into it; but to this deficiency of water add its use as a receptacle for every species of offal from factories, foundries, tanneries, stables and dwelling houses, and we are not surprised at its present condition. We have had one of these sources of nuisance carefully examined, and find that not only are most of the privies attached to dwellings on the streets adjoining the Falls drained into it, by means of private sewers, but that wherever a sewer leading to it can be reached, this sewer is connected with privies for drainage purposes.

1873 – The late City Council have distinguished their administration by the passage of an ordinance permitting the use of the “odorless excavating apparatus” for emptying privies in the day time. This is the inauguration of a new era, and destined to prove one of the greatest blessings of the age. As stated in a communication on this subject to the late City Council, your Commissioner holds that a large proportion of the cases of cholera infantum occurring in all large cities during the heated term are to be ascribed to the ancient and vile mode of doing this work, as well as to its transportation through the streets of the city, poisoning the air which is wafted into every open window. 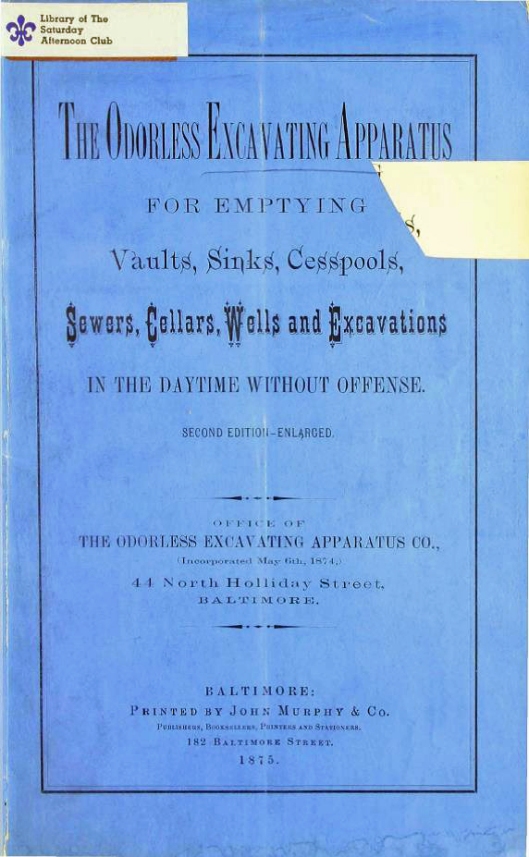 1888 – The adoption of a proper system of sewers for the present privy-wells will assist the Health Department in its endeavor to bring the City to a point where the ordinary sanitary condition will be such that epidemics of disease, resulting from or aggravated by filth, could be avoided or reduced to a minimum. The danger is greater than the people realize; the trouble is deep-seated and not to be reached by the Spring ‘cleaning up’ nor even by inspection. In most of the houses of this City there exists a latent power for evil, which is liable when its hour arrives to exert itself to the full of its terrible might.

I don’t believe that this apparatus lasted too long. It is no longer mentioned after the 1876 report.