Met to discuss the plans for the anniversary – a lot of events are being lined up. Two have to do with boats and water. Rec and Parks wants to have “Boating on the Lake” where attendees can get in a kayak or canoe and go out onto the lake. The lake is pretty big. The road around it is 1.3 miles.

Another event is for the Model Yacht Club to hold some demonstrations. When the water plant opened, all the way to the beginning of WWII the water engineer and the politicians battled it out over allowing model boat sailing on one of our lakes. We have two. The engineer had no qualms about letting people know how much he did not want the boats on either lake. Finally, the boat people won. When WWII broke out and security tightened around the water plant – no more boaters (I think the engineer started that war, just to have a reason to stop them!) On a few occasions, the engineer purposely sent the lake to drain – oops! sorry, forgot you guys were coming this weekend! 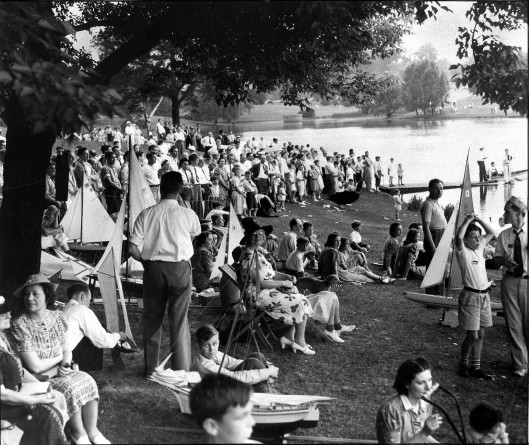 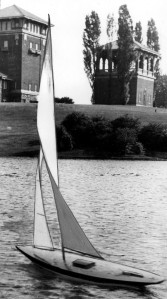 The below photograph is where the party will be. The small lake to the right is where the model yachts use to sail… 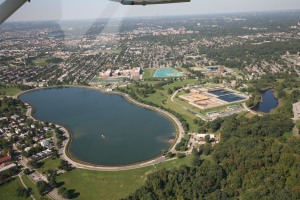 More water research has turned up some interesting facts about how the City of Baltimore viewed the threat of sabatoge and enemy activity during the first two world wars (see History Writings Page). It appears that during those two wars, a lot of effort was exerted into the safeguarding of the water supply. These were wars fought over 6,000 miles away. But, when the United States suffered a direct attack only 30+ miles away south of here and a couple hundred miles north, Baltimore City hardly batted an eye as to what to do to protect her water systems.

Police did do an occasional drive through of the property or park in one of the parking lots and ‘spend the night’ sitting in their cars over at the chlorinator. Then we were told that the maintenance staff needed to act as ‘Guards’ for the plants and because of union memorandums’ of understanding, overtime had to be distributed equally among all the classes of workers – so we had janitors, lab personnel and secretaries acting as guards to a plant that supplies water to 1.8 million people. These guards just stood by the front gates to the plants, asking for IDs.

A couple years later we did buy guard shacks and the city hired guards. There has never been any concern for the water supply since 9/11 like there was during the first world wars.