Spent Easter with Kathy’s family down on the Eastern Shore. Always a great time. On the drive home we stopped at a couple places. 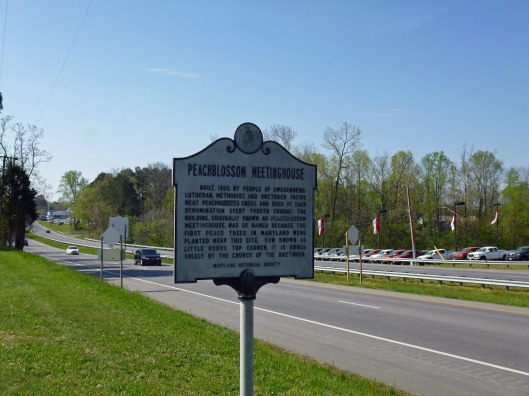 The first being just outside of Easton. This is one of those historical markers that you go flying by and have a hard time pulling over to read. But we did.

This is a little church (meeting house) and cemetery. Also where the first peaches in Maryland were planted.

Another little cemetery behind the house. 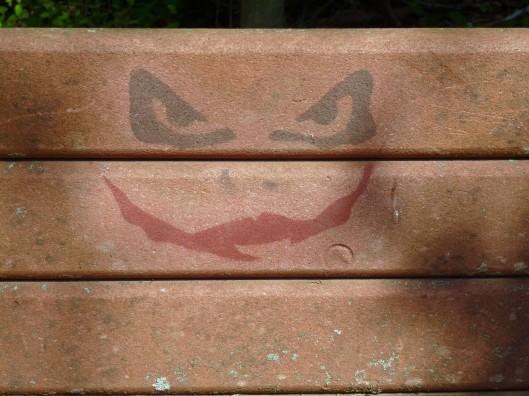 Then we headed to Terrapin Park on the Chesapeake. This is always a great walk. We started on the outer loop, walked the beach and then took the inner paths back to the lot. There were a lot of cars in the lot but not sure where all the people were? This was on a bench.

Hard to get Sid Vicious to pose. 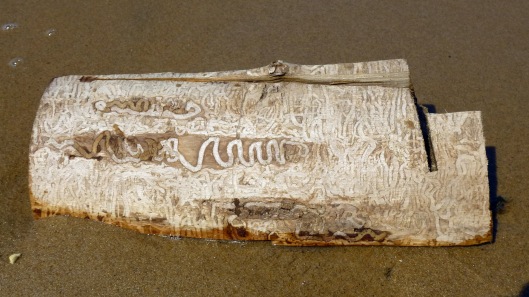 Alien markings on a piece of driftwood. 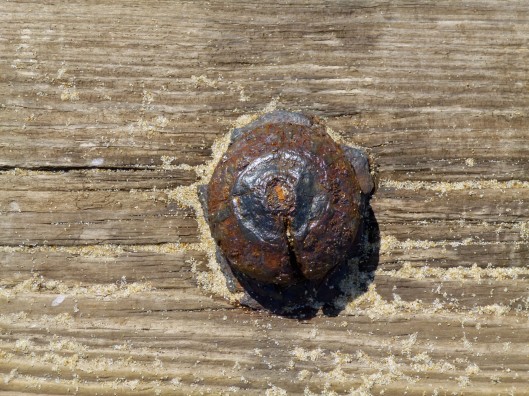 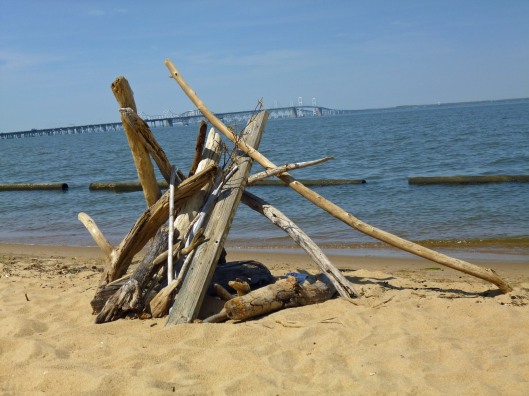 Cement cylinders along the shore.

Looking for other dogs to terrorize.

Adrift? Was hoping it would come our way but it seemed to be anchored down.

Wishing to dandelion seeds, spreading across the park…

Property next to the farm. Potential for a new home to be built…the steps are there!

There is a renewed interest in restoring the old Clifton Gate House. I have been invited to another meeting to determine what is to be done with it. I went to one of these meetings a while ago. A farmer wanted to turn it into a weekend farmers market. He said he had $10,000 he was willing to invest in repairs! That wouldn’t cover one small portion of the roof (Spanish tiles are expensive!) An interested party for this meeting is Civic Works. I hope they get the ok to take it over. They are currently restoring the Clifton Mansion in Clifton Park. Former estate of Johns Hopkins. It is a great project being done. I enjoy going on tours there.
The reservoir, piping and gate house were built between the years 1875 and 1888. The tunnel work between the Montebello Reservoir and the Clifton Estate commenced on August 16, 1876. In 1877 it was suggested to construct an additional lake at Clifton. In 1878 the Clifton Tunnel was completed and brick arched. The decision was made by the Water Board to go ahead and create an additional reservoir at Clifton. This work started in 1879. By 1881 the Lake Clifton construction was left unfinished due to lack of funds. The Clifton gate chamber was completed and a wooden shed is built over it to protect the iron work from the weather. Because of lack of funds, work halted on the lake and did not resume until 1884. (Water was sent to the City via the valves under the wooden shed)(Wish I could find a photo of that!)
Work at Lake Clifton progressed satisfactorily during 1887. The tunnel connecting Lake Clifton to Lake Montebello was in thorough working order. The gate-house superstructure is well under way. It is believed that it is advanced enough where water can be let into the Lake during the year 1888.
1888 – Lake Clifton is finally completed and put into service on December 27, 1888. Lake Clifton has a full capacity of 265 million gallons of water. The water area is 30 acres and is 30 feet deep and has the same elevation as Lake Montebello. (The completion stone for the gate house says 1887)

From a postcard, soon after building. 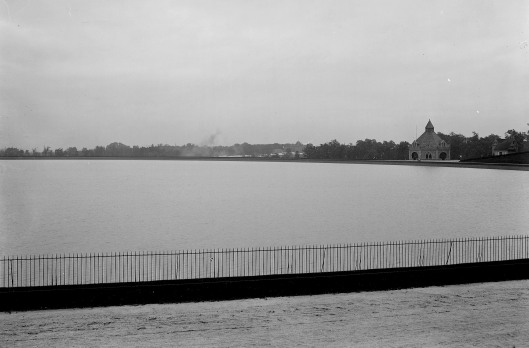 The lake (reservoir) in service and supplying water to the City.

Interior view a couple years ago.

The lake after being drained, to make room for a new school. Graves were found here.

Clifton Mansion being restored by Civic Works. From up in the tower you can see the gate house and the outline of where the lake was.

This Saturday, Kathy and I will be doing a walking tour of Greenmount Cemetery in Baltimore. I had previously done this tour about a year ago but it was very disorganized – by myself. I roamed around aimlessly, searching for famous people among the 9,000+ graves. This time we will be part of a tour given by historian Wayne Schaumberg. Some of the more notable headstones I hope to see are of Johns Hopkins, Enoch Pratt, John Garrett (B&O Railroad), Bodine (photographer), Booth (performer and assassin), Mayor Swann (Swann Lake which became Lake Roland in Robert E Lee park which is now Lake Roland Park) and Mayor Chapman (Lake Chapman, which is now Druid Lake) The Findagrave website lists all the graves.

Here are some sewerage notes and photos from the Sewage Commission:

1866 – We (Commission) constructed a wall on Greenmount Ave to Hoffman and extended the tunnel under Hoffman. Then made the necessary lateral sewer and inlet to carry off the surface water from the avenue (Greenmount). It is a great improvement for the Cemetery Company.

1887 – Monument to Hon. John Lee Chapman, ex-mayor – By Ordinance No. 105, approved October 10, 1887, the Mayor and City Commissioner were directed to have a monument constructed and erected in the lot where repose the remains of John Lee Chapman, one of the mayors of Baltimore; and to contract with the Greenmount Cemetery Company to keep the lot in good and proper order forever. Under this ordinance a contract has been made with Messrs. Bevan & Sons for the construction and erection of the monument at a cost of four hundred and seventy-five dollars, the plan presented by them having been approved. The contract will be made with the Cemetery Company in due time for keeping the lot in order.

1906 – Tablet to commemorate the beginning of sewer construction. On November 20th the Chief Engineer was authorized to design a suitable tablet to commemorate the beginning of sewer construction at the intersection of Ensor and Lanvale streets; the tablet to be placed in the face of the wall of Greenmount Cemetery, which is only a few feet from the point at which ground was broken for the work. The Chairman was requested to obtain permission from the Cemetery authorities to insert the tablet at the point named. The Chairman accordingly communicated with Mr. John A. Whitridge, President of the Greenmount Cemetery Company, and obtained permission from him to place the tablet as desired. A suitable tablet of bronze has been designed and will be placed in position as soon as completed.

Looking at the maps from back then, I was amazed at how close the Jones Falls is to the cemetery. 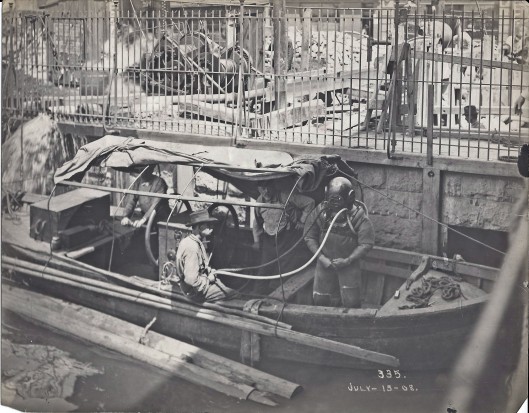 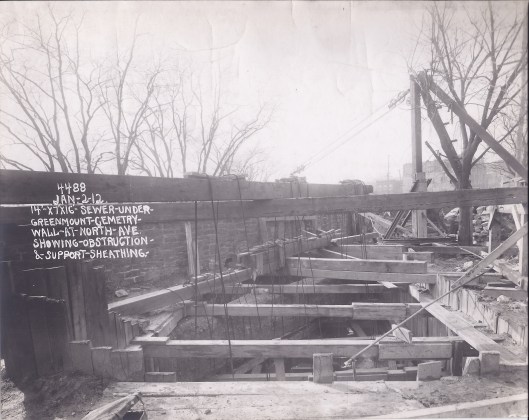 Momentum is starting to build for this years 100th anniversary celebration. I just received a list of proposed events and speeches for this momentous occasion and we are meeting next week to discuss. This event is going to be so big that other yearly events are being cancelled to focus on this one, which is unfortunate because some of them are really nice. But one thing I don’t see on the list of events is – Ghost Walk Tours! Below is a photo of the property where the filtration plant is now located. What happened to all those graves??

I see dead people! in the form of present day city employees….